After the merger with UASC (United Arab Shipping Company), Hapag-Lloyd has boasted one of its youngest fleets in the cargo industry. The vessels will be dismantled accordingly to the environmental regulations and certified shipyards. The seven-year-old container ships that had a capacity of 4,101 TEU will be recycled in Turkey and in China. The shipyards within Turkey and China are certified to recycle ships in an environmentally friendly manner.

The COO of Hapag-Lloyd said that the recycling of these ships is part of the restructuring project of their fleet. In 2017, the company already had three older vessels from the former UASC fleet that was dismantled in an environmentally friendly manner.

Also, Hapag-Lloyd is now offering a service to the East Coast of Africa for the very first time. They are already demands to Mombasa and Daar-es-Salaam over Jeddah for onward transshipment and local distribution.

They are expecting in April to deploy four vessels each with a capacity of 1,200 TEU in the new East Africa Service. This will be a sole operation.

Senior Managing Director Region Middle East, Lars Christiansen, informed that this would a trade which their customers have wanted the company to serve for awhile now. And EAS will benefit from Hapag-Lloyd’s strong presence in the Middle East and connection to the global network.

No matter where you are located, Ramon Inc. is an International Insurance Brokerage that can provided you coverage anywhere in the world. Freight Insurance, Cargo Insurance, Shipping Insurance is how our clients find us. For more information www.freightinsurancedirect.com

Understanding the difference between Freight Insurance and Freight Liability is a crucial part of the freight and/or logistics industry, especially in an unfortunate event that you need to process a claim. The questions you should be asking yourself is what is the covered by the liability, what is covered by the freight insurance (Full Replacement Value Called All risk that we offer), and what is the difference.

For example, there are three types of coverage offered by Ramon Inc. One of the coverage is called ALL RISK. This policy covers ANY damages while in transit. This includes damages from physical external cause along with partial or total, theft and catastrophe. This means that if the goods are not covered by All Risk then the insured/shipper is relying solely on the carrier’s contingent liability policy for insurance coverage should there be damage or loss during transit. Since it is a liability policy, the carrier is protected by statue and subsequently limited on their liability to pay claims. This affects the level of individual contract of carriage which was entered by the shipper and carrier. If the shipper imposes any commercial pressure on the carrier, or if the carrier is guilty of gross negligence, or the transit is subject to the Carmack Convention for interstate shipments in the US, then the limited liability of the carrier may be challenged.

Please keep in mind that in case of a claim and relying upon the carrier’s cargo liability insurance, you will be faced with an expensive and timely process that will ultimately involve lawyers and added expenses that accrues. Usually in a claim case, a carrier’s limit of liability is only $1,500. Most of the time customers are lead to believe that the trucking insurance general liability of $100,000 covers their cargo for full replacement value. This is not the case. The $100,000 covers them for all the loads that they haul. Within the fine prints of the contract of carriage, they have a limit of liability of $1,500 per claim. Just like ocean vessels have $500.00 limit of liability per container even if the goods in the container are valued at $500,000. The same with all airlines, they have limit of liability per luggage and/or cargo they carry on-board.  Therefore, Ramon Inc. with more than 31 years of experience in the market strongly advises everyone within the industry to check all the details/information prior to booking cargo insurance with any company or relying on the trucking company’s cargo insurance policy. This policy is simply a mandatory requirement by the DOT for any trucking to operate, and it is very limited.

Please contact us today or get a quote here http://www.freightinsurancedirect.com

Large trucks during 1990 to 2013 accounted for almost all freight transportation fatalities by 95.8%, and the majority of related highway fatalities involved passenger vehicles. Most hazardous material are transported by truck, and if there is an accident the damage is huge. About 2% of incidents in 2014 were accident related which composed 80.9% of all property damage.

This is just in trucking transportation so imagine the amount of damages and risks that take place during air transportation or ocean. Ramon USA (Ramon Inc.) offers the best coverages for your cargo during transit that will give you piece of mind. With the best rates and quality, we work with the best claim adjusters in the world with over 55 years of experience. Your claim is processed in just 7 days with 24-7 updates.

Customer Service is key to any business trying to survive in any industry. Keeping existing clients and bringing new ones is challenging but maintaining the quality of customer service and its efficiency has become second nature to Ramon USA.

We’ve been in business for more than 31 years. Providing the best quality and customer satisfaction. We understand that you work hard for your business to thrive. We are here to help make cargo insurance the easiest and simplest part of your business. We make sure that we provide you with the best coverage with the fastest process with the absolute best quality and customer service.

Below are just a few testimonials provided by our clients. 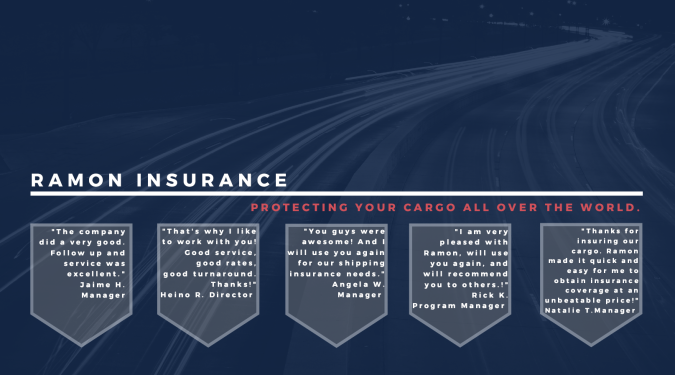 Why has there been an increase of TEU in the ports of Mexico? Because Mexico’s foreign trade over the past 20 years continues to offer significant opportunities. Foreign trade is a large percentage of Mexico’s economy than any other large country in the world. 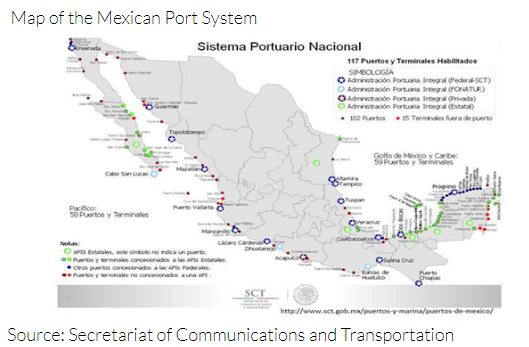 With Mexico’s investment in the ports, the country’s GDP has increased trade with America. With the NAFTA agreement, Canada and Mexico are the two largest destinations for US exports. A major boost to the Mexican farm exports, auto manufacturing jobs, and productivity and consumer prices. The gross domestic product for Mexico in 2017 was $2.4 trillion. And the country is quickly becoming an emerging market.  Ramon Insurance insures over $10M in freight Mexico bound.